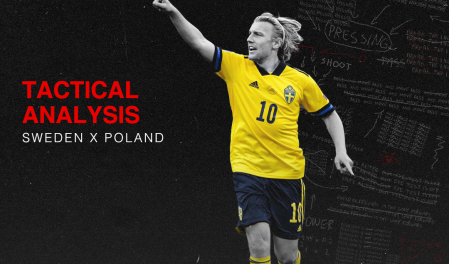 “After yet another miserable international tournament display at Euro 2016 in France, the Swedish national team decided it was time to gamble. Back home, a recently promoted side, IFK Norrköping, had just won the Allsvenskan for the first time in 26 years. Their manager, Janne Andersson, had only coached two sides before that unprecedented title win, but that was enough to convince his country to come calling. … Yet, fast-forward four years, and Sweden are gearing up for their second Round-of-16 tie in as many tournaments. Competing in two major competitions under Janne Andersson, Blagult have finished top of their group in both, outranking both Germany and Spain along the way. And, with seven points from nine this time, they’ve even now gone unbeaten. It’s a managerial success story that perhaps doesn’t get as much credit as it should. …”
Breaking The Lines
[PDF] Sweden vs Poland
Breaking The Lines – Tactical Analysis: Spain vs. Poland

This entry was posted on Thursday, June 24th, 2021 at 11:44 pm and is filed under Euro 2020, Europe, Football Manager, Spain, Sweden. You can follow any responses to this entry through the RSS 2.0 feed. You can leave a response, or trackback from your own site.