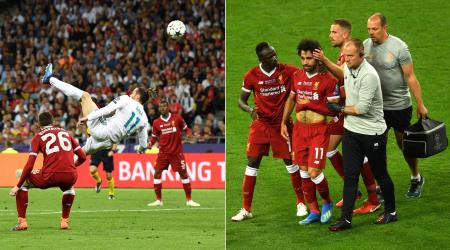 “KIEV, Ukraine – The decisive goal, scored with a Gareth Bale overhead kick moments after he had come off the bench, was brilliant, and the two Loris Karius mistakes that gifted Madrid goals either side of that were ghastly. But there was no doubting what had been the decisive moment as Real Madrid won its third European title in a row and its fourth in five years with a 3-1 triumph over Liverpool. As Keylor Navas went to take a goal kick, Mohamed Salah slowly subsided, sinking with a desperate sadness to the ground. It looked bad, and confirmation soon followed from Liverpool’s medical staff. He had not recovered from an injury suffered a couple of minutes earlier and his final was over after just half an hour. As Salah walked off, his face crumpled in tears, his right arm hanging awkwardly limp, Cristiano Ronaldo and Sergio Ramos both consoled him, but the truth is his departure had been Ramos’s fault. …” SI – Jonathan Wilson

This entry was posted on Sunday, May 27th, 2018 at 7:07 pm and is filed under Champions League, FC Liverpool, Football Manager, Jonathan Wilson, Real Madrid. You can follow any responses to this entry through the RSS 2.0 feed. You can leave a response, or trackback from your own site.