Paolo Rossi: Redemption and the crushing of the Brazilian dream 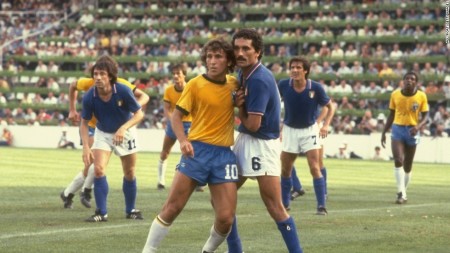 “In nature there’s a brutal truth about something beautiful always getting its comeuppance. Whether it’s a doe-eyed mammal striding elegantly across the plain or a beatific panfish darting deep between the oceans, there is always the waiting mechanics of a set of teeth ready to devastate its backbone. Football always comes full circle like that too. The beautiful game can’t defy the laws of the system forever, nor its progression. In a thrilling game in the 1982 World Cup, that philosophy would play out beautifully. …” Football Pink (Video)

“LIMA, Peru — The thousands of fans arrived at the Estadio Nacional as a sea of red and white. For more than an hour, they had paraded through the avenues of central Lima, dressed in their national team jerseys, blowing their vuvuzelas and pushing their children ahead of them in strollers. Now, after filing inside Peru’s national stadium, they sang Peru’s national anthem, waved Peru’s flag and hoped — against the longest of odds — that their festive display of national camaraderie would not be in vain. For a week, their energies, and much of Peru’s attention, has been focused on the case of Paolo Guerrero, the star striker who helped lead his nation to its first World Cup in 36 years but now seems all but certain to miss the tournament because of a doping ban. …” NY Times

“… The extraordinary story of the next few weeks is essentially one of what happened to this confidence – ebbing away bit by bit until one scarcely believable afternoon in Belo Horizonte brought about a candidate for the most amazing result in World Cup history. Brazil prepared with a routine 4-0 win over Panama, followed by a laboured single goal triumph against Serbia. There was no cause for alarm. This was merely the warm up phase in a competition that usually goes to the side that peaks at the right time. …” World Soccer – Tim Vickery