The Players Are Retired. But Try Telling Them the Games Don’t Matter. 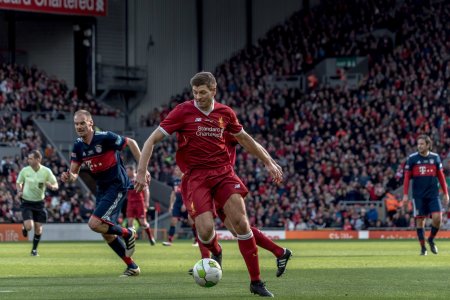 “LIVERPOOL, England — As soon as he hit the pass, Xabi Alonso stopped dead in his tracks, and raised his hands to his head in horror. He had picked up possession on the edge of Liverpool’s penalty area, directly in front of the Kop. He was under no pressure. He turned elegantly toward his goal, ready to build yet another attack. He has done it thousands of times over the years, and this time, too, he looked a picture of calm — right up until he played the ball directly into the path of a slightly startled opposition striker. Liverpool, a few minutes before, had been three goals ahead. Now, thanks to Alonso’s momentary mindlessness, it was 4-3 down. …” NY Times

“BARCELONA, Spain — A long hail of whistles and jeers from a crowd numbering in the tens of thousands might not be the most articulate way to express a political opinion, Arnau Pans acknowledged with a shrug. But, in his eyes, it can serve a purpose. Pans, 24, is a die-hard fan of the soccer club F.C. Barcelona and, like many such fans, an active supporter of the Catalan independence movement. On Saturday, for the fifth consecutive year, Barcelona — the most high-profile of Catalan institutions — will appear in the final of the Copa del Rey, the oldest soccer tournament in Spain. And for the fifth straight year, that means questions about free expression and the boundaries of political etiquette are being debated as vehemently this week as questions about team tactics and lineups. …” NY Times (Video)

Vulnerable channels and 20 zones: the tactics behind Guardiola’s title win

“Ottmar Hitzfeld, the former Borussia Dortmund and Bayern Munich manager, used to speak of the red zone, a central area of the pitch just outside the penalty box. Control that, he believed, and you controlled the game. If in your half you denied the opposition the ball in that space, they were forced wide and while crosses can be dangerous they are a low percentage route to goal. …” Guardian – Jonathan Wilson (Video)

“A bicycle kick is called a rovesciata in Italian. Taken literally it can mean reversed. After all, you’re scoring with your back to goal. But the best way to look at it is upside down. The bicycle kick Simy scored to get relegation battling Crotone a point against Juventus on Wednesday night did exactly that to Serie A. It turned a title race many considered completely over on its head. Juventus started the night six points clear of Napoli. Twice, over the course of a remarkable evening, they found themselves nine points ahead of them. …” ESPN

The best players out of contract: Reina, Robben, Buffon, Can, Ribery, Wilshere

“The football season is coming to a close, which can only mean one thing: agents gearing up for business over the summer. The Premier League transfer window doesn’t officially open until 17 May but there are many out-of-contract players ready to pack their bags. Among them could include Jack Wilshere, who has been offered a new deal at Arsenal, serial Bayern Munich winners Arjen Robben and Franck Ribery and Liverpool midfielder Emre Can. But how much do you know about others who have performed well this season, according to the CIES Football Observatory? The research group has compiled a top-50 list based on six different areas for outfield players, including recovery, distribution, chance creation and shooting. …” BBC

2018 MLS Ambition Rankings: Which Clubs Raise the Bar Highest as the League Grows?

“With each passing season, the potential rises and the boundaries are stretched. We’ve see it recently on the field, where Toronto FC became the first MLS club to eliminate two Mexican foes during a single Concacaf Champions League campaign. And we see it off the field. Look to D.C. United and Los Angeles FC, which are building stadiums in the heart of two of the USA’s biggest markets. Or behold Atlanta United, which broke the domestic transfer record with its $15 million acquisition of an Argentine teenager. The leeway clubs now have to operate within MLS’s limits (even if some are self-imposed) is expanding. …” SI (Video)