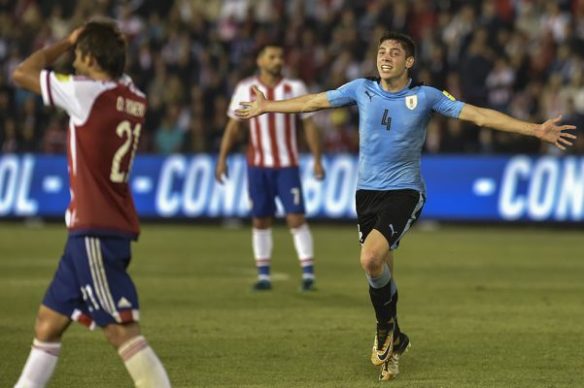 Uruguay’s Federico Valverde celebrates after scoring against Paraguay during their 2018 World Cup qualifier in Asuncion
“There is almost too much drama to take as South America’s World Cup qualification campaign moves into Tuesday’s final round. Amid the threat of elimination hanging over Argentina, and continental champions Chile, the remarkable resurgence of Paraguay and a crunch game between Peru and Colombia, Uruguay are flying under the radar. Little space has been devoted to the fact that, barring a mathematical miracle, the Uruguayans have already booked their place in Russia. This breaks a pattern. In all of the other campaigns this century Uruguay got underway with a comfortable win at home to Bolivia only to wobble along the way before just managing to clinch the play-off slot in the final round. …” World Soccer – Tim Vickery

“From Vinicius Júnior, who has already signed for Real Madrid, to ‘the Romanian Donnarumma’ the Guardian identifies 60 of the best players in the world born in 2000. Check the progress of our 2016 class | 2015 | 2014” Guardian

“It is not something you often have to consider but what if José Mourinho was right? What if, on Saturday, there was for once no bluff or manipulation, no attempt to provoke or deflect attention: what if the analysis he gave of Manchester United’s 0-0 draw at Liverpool was straightforward and correct? …” Guardian – Jonathan Wilson

“For around 30 years, from the 1986 World Cup through the night of Tuesday, Oct. 10, the United States men’s national soccer team managed to project at least a pleasing illusion of progress. Maybe it wasn’t always real progress. Maybe it wasn’t the kind of spectacular success enjoyed by the United States women’s team, which has won three World Cups and four Olympic gold medals and galvanized generations of fans. But there was always something you could point to, some piece of evidence to suggest that the men’s game was improving in this country. That the people at the top had a plan. …” NY Times

“Manolo Gabbiadini hit a brace as Southampton twice came from behind to draw 2-2 at home to Newcastle United in an entertaining encounter at St Mary’s this afternoon. Newcastle took the lead in the first half through Isaac Hayden’s first Premier League goal but Southampton equalised early in the second half when Gabbiadini, who has struggled this season, managed to find the net.” Squawka

“In 1903, The German Football Association held the first championship in association history. Thirty teams were eligible. Six entered. Move forward to August 2017, I found myself watching the film Leatherheads, a Gridiron Football film starring George Clooney. In Leatherheads, Clooney is a captain of a team in a failing league. His actions rejuvenate gridiron football and turn it into one of the most popular sports in America. As I was watching the film, I began researching the history of our beloved German Football Association. I quickly realized that there simply was not much information on the roots. …” Bundesliga Fanatic