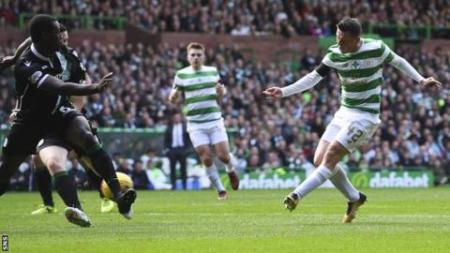 Callum McGregor opened the scoring and later levelled with his sixth goal of the season
“Hibernian came close to ending Celtic’s now 58-game unbeaten domestic run on Neil Lennon’s return to his old club. The former Celtic boss saw his side fall behind to Callum McGregor’s sweet first-half strike. But two thumping goals from Scotland midfielder John McGinn put the visitors ahead with 13 minutes remaining. But they could only hold the lead for three minutes, McGregor tucking home an equaliser before Scott Sinclair went close to a late winner for the hosts. Celtic remain top of the Premiership, on goal difference from Aberdeen, while Hibs drop to sixth, but level on points with fifth-placed Motherwell. …” BBC

This entry was posted on Sunday, October 1st, 2017 at 12:31 am and is filed under Celtic, Scottish Cup. You can follow any responses to this entry through the RSS 2.0 feed. You can leave a response, or trackback from your own site.