Dimitri Payet stars for France in Euro 2016 opener vs. Romania 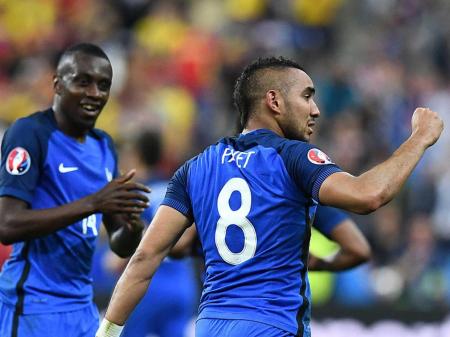 “Just as Euro 2016‘s opening match was threatening to end in with an anti-climactic draw, Dimitri Payet delivered what may wind up being one of the competition’s signature moments. The West Ham United midfielder’s 89th-minute left-footed blast delivered a 2-1 win to France over Romania at the Stade de France and brought a host nation to its feet. Payet, used here on the left, was a slightly controversial selection ahead of Anthiny Martial, but he was by far France’s best player on the night, and, just when something special was required, he conjured a shot of startling quality, arrowed into the top corner from the edge of the box.” SI – Jonathan Wilson

This entry was posted on Sunday, June 12th, 2016 at 10:43 pm and is filed under Euro 2016, Europe, France, Jonathan Wilson. You can follow any responses to this entry through the RSS 2.0 feed. You can leave a response, or trackback from your own site.