In France, a Political Football 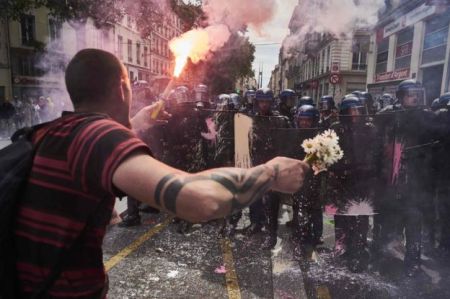 A protester faces police with a torch and a bouquet of flowers in Lyon, 26
“The French Socialist government is facing increasing unrest over its proposed labor reforms, which may disrupt the Euro 2016 soccer championship. In late March, the Nuit debout movement resurrected Occupy-style assembly tactics in response to the proposed reforms. In May the government attempted to use Article 49.3 to bypass parliament and force through the legislation. Now French rail workers are on strike and potential strikes by other unions loom, possibly threatening the Euro 2016 soccer championship. Strikes by power plant operators are causing blackouts. At one point, the only paper appearing in France was the left-wing L’Humanité due to action by the printers. Behind the strikes is France’s leading militant union, the CGT. In other news, the Louvre is closing due to recent flooding.” Metafilter

This entry was posted on Saturday, June 4th, 2016 at 1:22 am and is filed under Euro 2016, France. You can follow any responses to this entry through the RSS 2.0 feed. You can leave a response, or trackback from your own site.