Blaming Bale or Missing Modric: Why Has 2015 Been So Awful for Real Madrid?

“Two months ago, Real Madrid had won 22 games in a row, they’d recently been crowned Club World Champions, and it seemed like they’d finally solved the inconsistency that plagued last year’s domestic campaign. In short, the defending Champions League winners were the best team in the world. Or, as Sergio Ramos put it: ‘Real Madrid is God’s team and the world’s. We are living a splendid and unique moment.’” Grantland

Roma 1-1 Juventus: Juve revert to a back three and sit deep

“Juventus played for, and achieved, the draw which means they remain firm favourites for a fourth consecutive Serie A title. Rudi Garcia’s side was largely as expected, with Francesco Totti playing the false nine role, and Adem Ljajic on the right flank. The only change from the Europa League victory over Feyenoord was in goal, where Morgan De Sanctis returned.” Zonal Marking

Bolivian Clubs Are at Home in Thin Air

“Tucked tightly among the high-rises of the Miraflores district of La Paz, Bolivia, the Hernando Siles stadium is one of those great South American dust bowls drenched in character. Yet few stadiums anywhere can match its home-field advantage: Nestled in the Andes at a lung-tightening 11,932 feet, it brings soccer to the very roof of the Americas. Last month, it was where the Brazilian club Internacional arrived only hours before kicking off this season’s Copa Libertadores, the South American championship. Internacional had planned to spend only 12 hours in La Paz to minimize the effects of the city’s altitude, but even that was plenty for the environment to take its claustrophobic toll.” NY Times

Lille: Tactical Negativity and a View of the Future 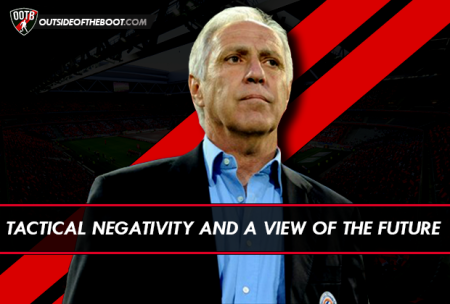 “Despite the money spent at Monaco and Paris Saint-Germain last season, the story of the season at the winter break in Ligue 1 last year was surely Lille, who had conceded only eight goals to that point, buoyed by a remarkable run of eleven games without conceding. That run had come to an end in a Week 17 loss to Bordeaux, as an unlucky deflection found the back of Vincent Enyeama’s net and Les Dogues stumbled to a 1-0 defeat on the road.  Quickly righting the ship, a win against Bastia and a more than creditable draw at PSG left the northern side only a point behind Monaco and four behind the leaders at the break, a fine achievement in Rene Girard’s first few months in charge, especially considering the team had been stripped of much of its offensively minded talent in the summer, with the departures of Dimitri Payet, Florian Thauvin and Lucas Digne.” Outside of the Boot

Liverpool – A Show Of Strength

“It was so close. Although Liverpool supporters would naturally have been disappointed that Brendan Rodgers’ team narrowly missed out on securing title winning glory in the 2013/14 season, objectively speaking their surge to second place in the Premier League represented great progress. Not only did they improve significantly from the previous season’s seventh, but they also qualified for the Champions League, a competition that has played an important part in the Reds’ famous history.” The Swiss Ramble

“Ian Cathro has not followed a conventional career path, but he has still encountered lingering assumptions. During his first pre-season as assistant coach at Rio Ave in Portugal, a training session based on running rather than ball work prompted some players to cast withering glances his way. As a Scotsman, even one whose very presence in the Portuguese top-flight at an age when he was younger than many of the players in the squad was unorthodox, still prompted stereotypical thinking.” BBC