“While it is foolish to read too much into friendly results, especially with both sides missing key players, Brazil’s visit to the Stade de France last night provided for some compelling viewing and should give both managers much to think about. With the hosts missing Paul Pogba, Yohan Cabaye and Hugo Lloris, as well as Mathieu Debuchy, and Brazil without the Paris Saint-Germain trio of David Luiz, Marquinhos and Lucas Moura, injuries limited both teams’ overall effectiveness, even as both Dunga and Didier Deschamps sought to achieve continuity by using their preferred formations. France, as hosts of Euro 2016, won’t play a competitive match until next year, and while Brazil do have the Copa America in a few months, the bottom line from this encounter seemed to be to encourage familiarity, trying out different players in a fixed system, as no changes were made until deep into the second half, Brazil already 3-1 up.” Outside of the Boot

How Van Gaal has made his “philosophy” count for Man United

“If you come at the English with a philosophy, you best not miss. After all, failure to make high-minded ideas count will always count against managers who dare to stick their heads above the pulpit and define themselves as thinkers in one form or another. Andre Villas-Boas was far from blameless when it came to his two Premier League dismissals at Chelsea and Tottenham Hotspur, but his profile as a bookish, bright young analyst hardly helped to endear him to his new public. Similarly, Rafael Benitez’s exotic preferences for zonal marking and stringent squad rotation marked him out as a foreign oddity ripe for derision. Arsene Wenger and Brendan Rodgers both receive plenty of ridicule for their love of concepts and scholastic mannerisms when the results begin to dry up.” Squawka

“Listen here, lad, Don’t think for a tinker’s red second that I don’t know exactly how you feel, finding an email from me. I know, Cristiano. If there’s one thing they could say about me, it’s that I always knew what my boys were feeling — better than they did, most times, not that it took a chess master to out-think Gary Pallister. And yes, son, you’re still one of my boys. Now and always. Not a transfer fee on earth’ll win you a move from that club. So quit grimacing at your screen like a Kirkcaldy bricklayer with his first taste of chicken vindaloo. Sit down and pay attention. Bloody laptop’s probably got rhinestones on it.” Grantland – Brian Phillips

“The most famous image of Miguel Herrera shows the Mexico head coach going super saiyan. Exuberant goal celebrations like that one have gone viral since his Club América days, but the most popular depicts Herrera twisting and yelling before the edit kicks in to make him transform in Dragon Ball Z style. When Mexico entered the global spotlight at last summer’s World Cup, the gifs made Herrera El Tri’s biggest star.” Soccer Gods

“Barcelona moved four points clear at the top of La Liga thanks to Luis Suarez’s winner. Sergio Busquets was only fit enough for the bench, so Javier Mascherano played in the holding role, with Jeremy Mathieu the left-sided centre-back. Otherwise, the team was as expected. Xavi Hernandez had surprisingly started over Ivan Rakitic in the reverse fixture, but Luis Enrique didn’t replicate that error, so we had the unusual sight of Barcelona without either Busquets or Xavi, the two players who usually control this game.” Zonal Marking

“Ever wish you’d chronicled your life as football fan, from that very first enlightening moment to whatever stage of infatuation, loathing or ambivalence you’re at now? Well, Michael Agovino has sort of done that – only in retrospect. The Soccer Diaries reads exactly as you’d expect given its title; it’s a journal – of sorts – taking us through his life as a soccer fan. In all probability, Agovino should never have written this book at all. Not because of a lack of quality, but because his background weighed heavily against him even knowing what soccer was.” Football Pink 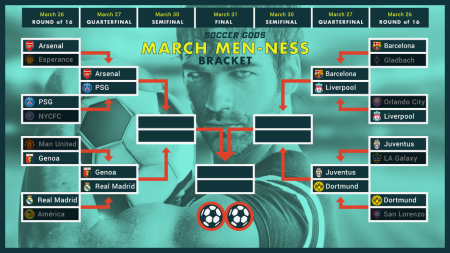 “If you’re wagering on March Men-ness, respect one universal truth: The Round of 16 is no place for upsets. If the favorites fold, that’s going to come later, when any newfound hotness will thrive on the momentum of knocking out old studs. To open the tournament, though? The big boys always bring it. Yesterday, no favorite favorited more than Arsenal, who destroyed Tunisia’s Esperance in your Round of 16 votes. Borussia Dortmund? Juventus? They also enjoyed huge victories, so the flood of votes didn’t necessarily come from one fan base. These Englishmen, Germans and Italians all saw their refined features rewarded with easy wins.” Fusion

“Jackie Carey is said to have written in his official report to the FAI on the game between Ireland and Poland in Katowice in May 1958 that it was ‘fitting that our association should be the first to resume international games with this predominantly Catholic country.’ This curious observation raises a couple of points. The first is: What on earth was the team ‘manager’ on about? The Poles had been back in international football for a decade by the time the game took place and their first post-war attempt to qualify for a World Cup, which included a 2-1 win over the Soviet Union in front of 93,000 in the same stadium where Ireland played, had only ended the previous year with a play-off defeat by the same opponents in ‘neutral’ East Germany.” Irish Times

“1. Football at the Arsenal (1937). Exactly how much effort the BBC put into television during the medium’s infant years is a moot point. Take the opening day of their regular service, on Monday, 2 November 1936. At 3pm, the curtain went up for pompous welcoming speeches by various BBC grandees, blowhards and windbags. After a whopping 25 minutes of programming, the station paused for its first interval. Another 35 minutes and it was time for closedown, followed by large G&Ts all round, then a siesta. Thanks, BBC, you pissed-up shower of indolent toffs!” The Blizzard