Arsenal 2-1 Liverpool: Arsenal more disciplined despite a rotated side 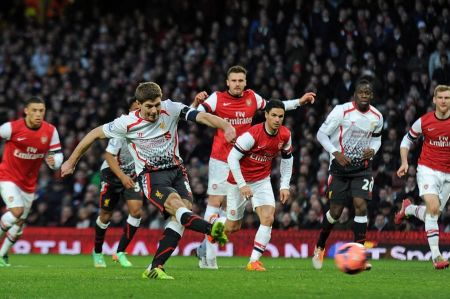 “Arsenal narrowly won an extremely open cup tie. Arsene Wenger rested various players ahead of the meeting with Bayern on Wednesday. The most interesting inclusion was striker Yaya Sanogo, making his first start. Brendan Rodgers brought back Daniel Agger in place of Kolo Toure, selected Joe Allen rather than Jordan Henderson, and also gave a runout to reserve goalkeeper Brad Jones. Arsenal were much improved compared to last weekend, particularly in terms of positioning and organisation.” Zonal Marking

This entry was posted on Wednesday, February 19th, 2014 at 9:18 pm and is filed under Arsenal, FC Liverpool, Football Manager. You can follow any responses to this entry through the RSS 2.0 feed. You can leave a response, or trackback from your own site.