Kwame Nkrumah’s team are going to the World Cup 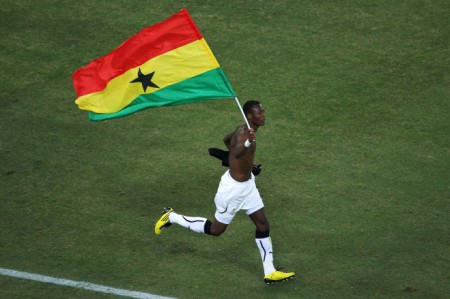 “Despite coming in for plenty of criticism from European and American journalists, Africa’s high-stakes, winner-takes-all World Cup qualifying system once again threw up an enthralling set of matches. The most remarkable result was Ghana’s whopping 6-1 win over Egypt, and “BaGhana BaGhana” confirmed their tickets to Brazil yesterday in Cairo. There has always been something special about the Black Stars. What gives football its meaning in England is largely its representative capacity: fans rally around a club, of their city, of their class, seeing the team and the institution as a projection, in many ways, of themselves. This is almost always a regional, not national, phenomenon. Since England was the coloniser rather than the colonised, national representation through football was largely unnecessary. Even today, very few English people identify with the national team. We’ll support them, sure, but we don’t see ourselves in them (thank God).” Africa is A Country

This entry was posted on Wednesday, November 20th, 2013 at 8:13 pm and is filed under World Cup 2014. You can follow any responses to this entry through the RSS 2.0 feed. You can leave a response, or trackback from your own site.