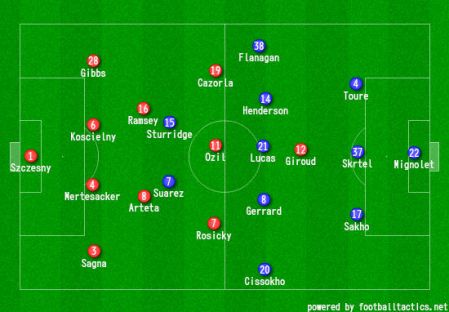 “The past summer was one in which change was the watchword in the upper echelons of the Premier League. The top 3 of last season all have new managers at the helm; a fact that many hope will lead to another exciting title race. This upheaval also means that teams such as Arsenal and Liverpool have an excellent opportunity to challenge for the title. Coming into the game it was a case of so far so good for both sides. Since their defeat to Villa on the opening day of the season, Arsenal dropped just 2 points out of a possible 24 and occupied the top spot in the league table. Meanwhile, Liverpool have been impressive and boast of arguably the most dangerous strike partnership in the league right now in the form of Sturridge and Suarez.” Outside of the Boot

Arsenal: Premier League’s top side answer their critics in style
“Arsene Wenger will face the same questions until the day he can hold up a trophy in front of his inquisitors and remove the 2005 FA Cup triumph as the last entry in his and Arsenal’s list of honours. Wenger knows there are still doubts about his team’s resilience and staying power – but he can deliver the answers with increasing confidence after a 2-0 win against Liverpool at Emirates Stadium on Saturday that left Arsenal five points clear at the top of the Premier League.” BBC

Rodgers must resist urge for wholesale change
“Liverpool’s defeat at the Emirates on Saturday has thrown up far more questions than it provided answers. The most simplistic way to break the game down would be to say that Brendan Rodgers’ men lost to a better side and that it highlighted the remaining gap between the Reds and where they want to be. That’s the line most have taken and while it’s mostly a fair one, I don’t think it paints an entirely accurate picture as a lot of Liverpool’s problems in this game were of their own making and are therefore — hopefully — fixable.” ESPN (Video)

Three Things: Arsenal vs. Liverpool
“Three observations from Arsenal’s Premier League victory against Liverpool at the Emirates. After the difficulties of the past two weeks and the past two big games, the surprise here was how thoroughly easy it was for Arsenal in this 2-0 victory. They were a step above Liverpool in almost every facet of the game and proved themselves a class above as a team. In many ways, this was reminiscent of the defeat Arsenal themselves suffered to Borussia Dortmund here. Liverpool simply came up against a more sophisticated outfit, both in terms of tactics and technique.” ESPN

Matchday Musings: Arsenal 2-0 Liverpool
“… Koscielney dispatches SAS. In the lead up to the game, Liverpool’s new ‘SAS’ strike partnership was on everyone’s lips. Daniel Sturridge and Luis Suarez have been in scintillating form this season, scoring a superb amount of goals. Therefore when they lined up in front of a packed Emirates, goals were to be expected. Arsene Wenger stuck with his trusted pair at centre back, and they did an excellent job of stopping the most in form strikers in the league. Per Mertesacker put in a great shift, but Laurent Kocielney’s performance was to be admired. Sturridge tended to drift in to wider positions, with Suarez employing most of the Frenchman’s time. He dealt with him with ease, limiting him to very few opportunities. Staying tight to Suarez isn’t everyone’s idea of how to tame him, but it worked today and really gave Arsenal a great platform.” Beyond The Ninety Minutes

“… Gerard Pique, 7.1. Pique had one of his best games of the season. He was making plays all over the pitch, even getting involved on the attack, creating a good scoring chance with Alexis. Pique was near the top in just about every defensive category, even leading the team, by a large margin, in clearances. He was positionally very sound, though he did venture out of position on a few occasions. Pique’s distribution was excellent all game long as me misplaced just three short passes.” Barca Blaugranes

Bayern Munich and Pep Guardiola go in the record books

“With their 2-1 win against Hoffenheim, Bayern Munich have equalled Hamburg’s record of 36 consecutive Bundesliga games without a defeat, set back in 1983. The win also means that Pep Guardiola is undefeated in his first eleven games in charge of the club, the first coach in club history to do so. Goals from Mario Mandzukic and Thomas Müller put Bayern back atop the league after Dortmund’s win on Friday night and it also continues Hoffenheim’s winless record against the defending champions.” Bundesliga Fanatic

“The final game on an action packed Saturday saw Fiorentina travel to Milan to take on the Rossonieri. Milan have struggled in the league so far, and found themselves in 10th place going into the game. Fiorentina had played some fantastic football, but failed to convert it into results thus far. Neither team was especially close to the top or even the Champions League places, and therefore it this match was very significant to both teams, as a win could get them back on the trail for Champions League football.” Outside of the Boot