Arsenal 2-0 Napoli: Arsenal win the game early by attacking down the right flank 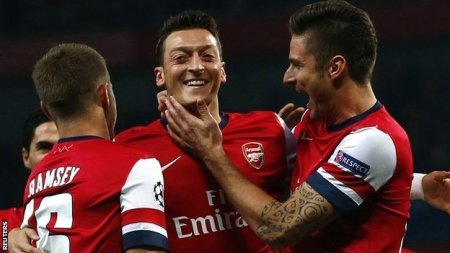 “Arsene Wenger fielded five natural central midfielders, but Napoli were opened up repeatedly in their left-back zone. Wenger was without a variety of players comfortable in wide roles – Theo Walcott, Santi Cazorla, Lukas Podolski and Alex Oxlade-Chamberlain – while Jack Wilshere was rested, with Mikel Arteta coming into the side and Arsenal’s three attacking midfielders playing fluid roles. Rafael Benitez was still without Christian Maggio, and also lost Gonzalo Higuain through injury. Arsenal were dominant from the first whistle, and Napoli rarely offered a goal threat.”
Zonal Marking

Arsenal 2 Napoli 0: Mesut Özil sets the tone as Arsene Wenger’s side turn on the style against Napoli
“When Arsenal play with the precision, pace and elegance that spiced some of their mesmerising first-half movement here the feeling grows stronger and stronger that the long, soul-searching, inquisition-scarred wait for a trophy might yet end this season. If it does, the player who should touch the trophy first should be Mesut Özil, who impressed again in a 2-0 victory. The German has strengthened Arsenal psychologically and as an attacking, trophy-threatening force. He has brought belief, assists and now his first goal for the club, a strike that celebrated his sumptuous technique. Özil was almost unplayable at times, gliding hither and thither, twisting away from opponents, the ball merrily snuggling his left foot, leaving Napoli bewildered and bewitched. Telegraph – Henry Winter

“It is a stern enough test to face Barcelona with 11 men, let alone 10. Celtic discovered precisely that. Anger was the overwhelming emotion in Glasgow’s east end after the dismissal of the Celtic captain, Scott Brown, proved the defining moment of a taut encounter. Brown’s departure on the hour was sufficient to hand Barcelona the impetus they needed to secure victory by a single Cesc Fábregas goal. It was a success they barely merited from a match that regressed into the realms of the bad tempered for the closing 30 minutes.” Guardian

Barcelona struggle without their Messi-ah
“Considering Lionel Messi plays in a squad of all the talents, Barcelona as one-man team might seem a far-fetched concept. However, many a footballing force has faded without its main man. Ajax fell sharply once Johan Cruyff departed in the 1970s; only recently have Napoli become a European force since the 1991 day when Diego Maradona fled Neapolitan life in drug-fuelled disgrace; Manchester United have never been quite the same after losing Cristiano Ronaldo.” ESPN

“Shakhtar Donetsk should win the championship this season, but it says something for the changes in the Ukrainian league that the verb is ‘should’ rather than ‘will’. The shakiness of Manchester United’s start to the campaign may be more obvious – while United lie 12th in the Premier League table, Shakhtar are third in the Premier Liha – but this has been a sobering couple of months for Mircea Lucescu’s side.” Guardian – Jonathan Wilson

“This season, more than any other in recent memory, has demonstrated how the consensus about a particular side’s predicament can change astonishingly quickly. Arsenal, who were in crisis after the Aston Villa defeat, now are in dreamland five games later. Chelsea seemed to have returned to their ruthless ways following Jose Mourinho’s return, then went three matches without a win. Liverpool were cool, calm and clinical after four matches, then lost at home to Southampton completely unexpectedly.” ESPN – Michael Cox

Statistical Analysis: How did Juan Mata do on his return to the starting line-up for Chelsea?

“Juan Mata was, incredibly, marginalized to a degree at the beginning of the season. The two time Chelsea player of the year was left out of Chelsea’s squad for the 2-0 victory over Fulham at fortnight ago, but managed to claw his way back into the side after a strong 45 minutes against Spurs last weekend. On his return to the starting 11 versus Steaua, how can we rate his performance? Juan Mata had a strong game for Chelsea. The Spaniard featured mainly as the no.10, although he interchanged with Oscar, who started wide right. Mata was in good creative form in this role and created six chances for his team-mates in the process…” Think Football