“The song remained the same for the U.S. men’s national team against Mexico at Crew Stadium. So did the score, as the Americans defeated their bitter rivals 2-0 on Tuesday night and are now on the brink of qualifying for the World Cup. Eddie Johnson broke a scoreless tie four minutes into the second half, heading home Landon Donovan’s corner kick. Donovan then added an insurance tally in the 78th minute, converting from close range after excellent work from substitute Mix Diskerud. A makeshift U.S. back line, with some considerable help from goalkeeper Tim Howard, performed solidly on the night and then was able to see out a critical victory.” ESPN (Video)

For Klinsmann’s U.S., competitive culture pays off in Mexico win
“The U.S. national team that will fly to Brazil for next summer’s World Cup will consist of 23 players. That limit is unfortunate, because it took a lot more than 23 to earn the trip. Clarence Goodson may not make it. The San Jose Earthquakes defender was an alternate on the current qualifying roster. He played in Tuesday’s clincher here at Crew Stadium only because of Matt Besler’s suspension. Mikkel Diskerud may not make it. He’s one of several players vying for minutes in a crowded and talented midfield. The same could be said for Alejandro Bedoya. Yet all three played an integral role in lifting the U.S. to another 2-0 win over Mexico and a seventh consecutive World Cup berth.” SI

U.S. Wins and Secures Spot in World Cup
“… Almost 30 minutes later, Landon Donovan tapped home the Americans’ second goal, extending a tradition at this stadium, against this opponent. The United States had defeated Mexico here, 2-0, in their three previous World Cup qualifying cycles: 2001, 2005 and 2009. And they did it again Tuesday night, weathering an early storm from a desperate Mexican squad before Johnson and Donovan delivered the killer blows to delight an announced crowd of 25,584.” NY Times (Video)

“Robin van Persie scored twice as the Dutch beat Andorra 2-0, and Turkey’s 2-0 win in Romania ensured they could not be overtaken at the top of Group D. Italy just needed to beat the Czech Republic to qualify, and goals from Giorgio Chiellini and Mario Balotelli overturned an early Libor Kozak strike. Belgium, Germany and Switzerland need two points to secure a place in Brazil. Germany guaranteed at least a play-off spot with a 3-0 victory in the Faroe Islands thanks to goal from Arsenal’s Per Mertesacker and Mesut Ozil and a third from Thomas Muller. Bosnia-Hercegovina and Greece both secured at least a spot in the play-offs in Group G, while France are likely to be in the play-offs after their 4-2 win in Belarus put them level on points with Group I leaders Spain, who have a game in hand.” BBC

World Cup qualifiers: who’s in, out and who has their fingers crossed
“Uefa. Italy came from behind to beat the Czech Republic 2-1 and Holland beat Andorra 2-0 to secure their places in Brazil next summer, both leaving fascinating battles for second in their groups and the possibility of a play-off (only the best eight runners-up from the nine groups play off). In Group D, Hungary, having surrendered the initiative with their 3-0 defeat to Romania on Friday, seized it back by thrashing Estonia 5-1, while Romania lost 2-0 at home to Turkey. …” Guardian – Jonathan Wilson

“Condemned as Brazil’s weakest squad in 60 years, the pressure is undeniably on for Scolari’s men as the road to the 2014 World Cup begins. Next year, the 20th World Cup unravels in South America, or more precisely—Brazil. The home advantage, arguably may give a morale boost for the men in yellow, or add even more pressure for such a young side to deliver on the grandest stage of them all. The last time a World Cup was hosted in Brazil, supporters were left heartbroken and distraught as it was local rivals Uruguay who came out victorious in the final so Brazil undoubtedly, will be looking to avenge those nightmares. Inspiring a Seleção to their 6th World Cup title will be by no means easy, but crashing out in the group stages simply isn’t an option for a nation looking to restore international dominance across the footballing globe.” Outside of the Boot

Tactical Analysis: How must England modernize their tactics for success? 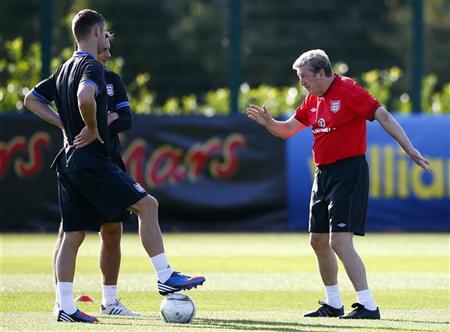 “With all of the talk of FA Chairman Greg Dyke and the targets for the England national team over the past week, it seems many have already written off the team’s chances of success at the coming world cup in Brazil 2014. There also seems to be an acceptance that England will find it difficult to qualify, and with this mood of doubt and discontent there is arguably a perspective whereby many fans would not be surprised if England were to fail to qualify, or at least not directly progress. Once again England fans have been put through a stuttering and inconsistent qualification campaign, with many unconvincing individual and team displays leaving many questions to be answered.” Think Football

Why do Premier League stars keep looking disjointed in English shirts?
“It wasn’t good, but it was good enough. England scrapped and ground its way to a 0-0 draw against a strangely subdued Ukraine to clamber over the toughest remaining obstacle between it and qualification for the World Cup, but it’s debatable how much credit it can draw from a stodgy performance. In a sense, this was typical England, technically substandard but sufficiently determined to drag itself through. In terms of spirit and defensive resolve — if not necessarily defensive shape — there was much to commend; in terms of ball retention and chance creation virtually nothing.” SI – Jonathan Wilson

“… 1 — ARGENTINA KNOW WHAT THEY ARE DOING. The first team from the continent to book their place in Brazil, Argentina’s qualification might seem predictable enough – but it looked anything but in the early stages of the campaign, when coach Alejandro Sabella’s side lost to Venezuela and drew at home to Bolivia. Since then, though, the side have made enormous progress. They are not perfect.” ESPN – Tim Vickery

“FC Porto aren’t even the best-supported team in their own country, they only play in the second biggest city in Portugal, and yet their contemporary European presence alone has alluded teams with five times the population in the containing area, and many, many times the income. UEFA Champions League winners in 2004, they have been drawn over the years with Manchester United, FC Bayern Munich, Chelsea, Real Madrid CF, FC Barcelona, Arsenal, AC Milan, Internazionale and compatriots Benfica as tops seeds in the world’s primary football competition. This year FC Porto took their place in pot one of the UEFA Champions League group stage draw for the third time in the last three seasons. They’re regulars in the Champions League last sixteen and a staple of the European football scene.” Outside of the Boot