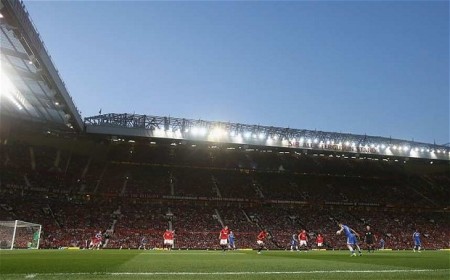 “The joy of such enthusiastically delivered news might be lost on some of those fans actually present. Sixty season ticketholders have been moved from their favoured habitat. This new £3 billion Premier League television deal comes at a cost for the match goer. Caring clubs are seeking to accommodate them in other parts of the stadium but fans are creatures of habit, wanting the same familiar routes, gangways, characters, seats, neighbours. It is like breaking up a good party, or even family. Television grows ever more powerful and demanding. More games are being screened in more countries with more cameras, some of them of the bulky, space-commanding 3D variety.” Telegraph – Henry Winter

“After a couple of years of harum-scarum goalfests between the big sides, Monday’s meeting between Manchester United and Chelsea was a return to attrition. It’s dangerous always to read too much into one game, but the indications are that defending is back at the top level of the English game — and it may be that that leads to improved performances in the Champions League. Many will suggest that is the influence of the return of Jose Mourinho, and it is true that he has no qualms about playing reactive football, but the stalemate at Old Trafford was just as much to do with the approach of David Moyes.” SI – Jonathan Wilson

Manchester United 0-0 Chelsea- Tactical Analysis
“A game between United and Chelsea is always monumental. This particular fixture, the first big game of the season, was further intensifying, as it marked David Moyes debut as United boss at the Old Trafford. Mourinho returned to the scene of some of his greatest successes, and with all the speculation surrounding Wayne Rooney (involving the two clubs), the game was further spiced up. The final score of Manchester United 0-0 Chelsea seemed a fair result, a scoreline that both sides played for and will be content with. Neither would particularly like to drop too many points this early in the Premier League season.” Outside of the Boot

“‘Hi Uli,’ Michael wrote. ‘I came across SC Westfalia Herne, the first team of Hans Tilkowski. That was quite surprising. I consider myself very knowledgeable on German football, but never heard about this club before.’ He added: ‘Checked the internet and found out that you, most probably, have never written about it. So here is an idea — maybe you should. I’d like to know more about them.'” ESPN

Kolo Touré shows signs of recovery at Liverpool after decline

“Usually when players decline it is a process so slow that at first it is almost imperceptible: a fraction slow to react here, slightly late to a challenge there, occasionally outmuscled or outpaced in a way they never used to be. Sometimes it is to do with age, sometimes with injury, sometimes form and confidence is eroded and never returns. With Kolo Touré, though, you can pinpoint the moment of crisis absolutely.” Guardian – Jonathan Wilson

Will Hughes: A Derby Fan On Liverpool’s Next Great Attacking Midfielder

“Will Hughes takes little spotting on the pitch. He stands out with his blonde hair as you would expect. You can use the word ‘shock’ if you like. He’s got hair that stands out on the football pitch like Robbie Savage or Jason Roberts used to do. He wears bright boots (but then again don’t all footballers these days?) but the days of plain black unless you were a real star (step forward Alan Hinton and Alan Ball) are long, distant memories…” Sabotage Times

“Unless Celtic’s players produce their best performance of the campaign to dislodge Shakhter Karagandy from their 2-0 advantage at the halfway stage of the Champions League play-offs, it looks as though inspiration will have to come from another capacity crowd in the east end of Glasgow when the Kazakhs arrive for the return on Wednesday.” Telegraph