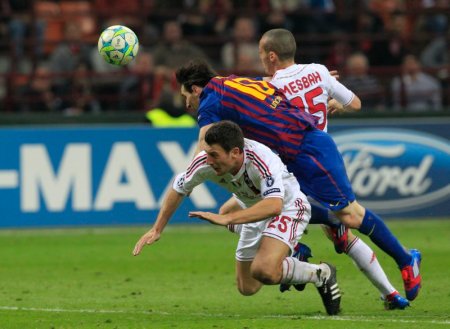 “Both sides created chances, neither found the net. Max Allegri was without various players, most notably centre-back Thiago Silva. However, Robinho was fit to start upfront. Pep Guardiola named Carles Puyol at left-back, and used Seydou Keita in midfield with Cesc Fabregas only on the bench. A brief summary of the tactical battle? Milan often did well to crowd out Barca’s attacks, but Barca should have stretched them more. There wasn’t a key battle, nor an overall tactical theme – but instead plenty of small areas of interest.” Zonal Marking

Antonini delighted to deny Barcelona
“A timely tackle from Luca Antonini proved crucial in allowing AC Milan to hold FC Barcelona 0-0 in the first leg of their UEFA Champions League quarter-final on Wednesday, and the Player Rater Top Player told UEFA.com: ‘I’m happy and proud about the way I played and we played.'” UEFA (Video)

Champions League goalless draw gives Milan hope for Barcelona leg
“As Massimiliano Allegri pointed out after watching his side hold Barcelona to a goalless draw on Wednesday night, two of the possible results at the Camp Nou next week will see Milan through to the semi-finals of the Champions League. A win would be good, but a draw with goals would do just fine.” Guardian

Milan hold Barca in stalemate
“AC Milan held Barcelona to a 0-0 draw in the first leg of the teams’ Champions League quarter-final at the San Siro. Milan should have been ahead just after the kick-off as Robinho found himself in space in the area, but he was unable to keep his close-range volley down.” ESPN

This entry was posted on Thursday, March 29th, 2012 at 7:55 pm and is filed under Champions League, FC Barcelona, Football Manager. You can follow any responses to this entry through the RSS 2.0 feed. You can leave a response, or trackback from your own site.