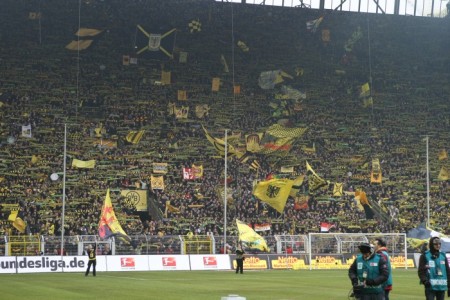 “Borussia Dortmund v St Pauli at the Westfalenstadion (Signal Iduna Park, if you must) was the first game I looked for when the Bundesliga fixtures were announced last summer. The Westfalenstadion was ‘The Big One’ (© Tony Pulis, probably.) Anyway, it was the one I desperately wanted to tick off my list of German grounds visited. I’d tried a couple of times to combine a trip to Dortmund en-route to watch St Pauli when we were in 2.Liga, and often played on different days to the Bundesliga, but the fixtures had never fallen for me. But to go there with St Pauli – that would be something else.” European Football Weekends

“Karim Benzema scored on his return to Lyon, but Bafetimbi Gomis netted a late equaliser. Claude Puel fielded a 4-2-3-1 system, making just one change from the weekend game. Jimmy Briand’s spectacular bicycle kick against Nancy wasn’t enough to keep him in the side, so Brazilian Michel Bastos played instead. The only minor surprise from Jose Mourinho was at left-back. Marcelo was left out, Alvaro Arbeloa started.” Zonal Marking

The Return of El Diego

“When the call came from HIS people, my first reaction was to panic. “Do you want me to change the name? In bed with Maradona not appropriate? Should this be In bed with Pelé? or Messi? or…..erm……Derek Mountfield?”” In Bed With Maradona

“The orchestrated crescendo of Parisian boos that greeted Kasabian front man Tom Meighan as he walked onstage at the L’Olympia in the French capital. Adorned in the red of England’s latest away shirt, the stunt on the surface appeared to be little more than a brazen example of jingoistic marketing, designed to appeal to the white-van-driver that lurks deep within every England fan.” In Bed With Maradona

“Chelsea eased past a disappointing Copenhagen side with two goals from Nicolas Anelka. Ståle Solbakken changed his side from the formation that had served him well in the group stages – using two strikers with Jesper Gronkjaer played out on the left, rather than just off the frontman. Carlo Ancelotti left out Didier Drogba and brought in Anelka and Fernando Torres. Copenhagen put up a good fight in the group stages, drawing at home to Barcelona and progressing ahead of Rubin Kazan and Panathinaikos, becoming the first Danish side ever to qualify for this phase of the European Cup.” Zonal Marking

Sensational Cavani signifies rebirth of Uruguay as a soccer power

Edinson Cavani
“Before they used to say “You were the champions? Sure, when football didn’t even exist, but today they’re looking at us in a different light,” Edinson Cavani said in an interview in El Pais this month about the impact of Uruguay’s World Cup campaign, which saw the country reach fourth place after decades of absence from center stage.” SI

” A book called The Bob Marley I Know is planned for publication later this year. It’s possible that a copy will be sent to FIFA headquarters as Sepp Blatter presented an award to the writer, Alan ‘Skilly’ Cole, in September 2010 in recognition of his contribution to Jamaican football. A month later the appeals courts in Kingston quashed an 18-month prison term for drugs offences which had been hanging over Cole since 2007. As you may have gathered, Skilly Cole was not a run-of-the-mill professional footballer.” WSC

“A stoppage time winner from Rafik Djebbour gave Olympiacos a huge victory in a crucial derby. The headline news from Ernesto Valverde’s teamsheet was his decision to play Francois Modesto in the holding midfield role, rather than Dudu or Moises Hurtado, who were not considered 100% fit. Jesualdo Ferreira started Sotiris Ninis ahead of Sidney Govou on the right of midfield – the rest of the side was as expected. As so often the case in the Derby of the Eternal Enemies, the game was scrappy early on, with the referee having to award lots of free-kicks. Consequently, the game took a while to settle down into any kind of rhythm.” Zonal Marking