Bye-Bye Bielsa: The Governance of Soccer and Chile’s Forking Path

“Recent news reports from South America indicate that the coach of Chile’s national team, Marcelo Bielsa, will be leaving his post with immediacy. To the casual observer, this comes as a shock. Bielsa has been credited with restoring discipline and professionalism to a national soccer association known more in recent years for scandal than for footballing feat.” (Soccer Politics)

“Football Manager 2011 (FM) is released this Friday in Europe and tentatively dated the 16 of November in the US. A Football Management ‘simulator’ you are put in charge of basically any club of your choice in a ridiculously realistic setting. Playing Football Manager can often be like taking a degree in football, you learn the rules of each league, the transfer rules regarding ‘Bosman’s’ and the compensation clauses in signing youth players and also you will learn to love, hate and covet players you may never have heard of.” (EPL Talk)

“A pulsating game that finished all square, with both sides disappointed to have given up the victory. Milan recalled Ronaldinho in place of Robinho, and moved back to a 4-3-3 rather than the 4-3-1-2 they used in the first half against Juventus. Only Alessandro Nesta remained from that back four, with Gianluca Zambrotta, Ignazio Abate and Thiago Silva coming into the side.” (Zonal Marking)

Chelsea 4-1 Spartak Moscow: a stuttering start, but Chelsea eventually power past the Russians

“Chelsea took longer than usual to get into their stride, but recorded a familiar comfortable victory.
Chelsea rested John Terry and Michael Essien, so Branislav Ivanovic moved to the centre of the defence, and Ramires came in on the right side of midfield. Saloman Kalou replaced Florent Malouda. Spartak moved Yevgeni Makeev to right-back and brought in Andrei Ivanov on the left. Alex returned, so Ari dropped to the bench.” (Zonal Marking)

Blues forced to play out second billing
“It has been many a long year since Chelsea supporters looked upon those who swear allegiance to Tottenham Hotspur with an envious eye, but that might just have been the case this week. Carlo Ancelotti’s Blues may be riding high at the top of the Premier League table and assured of a placed in the last 16 of the Champions League after this comfortable romp against an outclassed opponent, yet such serene progress becomes a little mundane when it is the norm.” (ESPN) 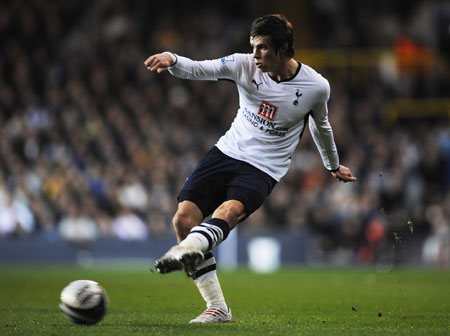 “Yesterday everybody screamed the praises of one Gareth Bale, one week after a certain disreputable website sang his praises by comparison to the Garbage Pale kids. That disreputable website was this one. And I admit my mistake. Gareth Bale is a shining example of athleticism, a white knight, the hero at the end of the fairy tale who smooches the princess, slays the dragon, and lives happily every after. But Pippo Inzaghi is not. Which is why I love him.” (futfanatico)

“Ajax adapted their formation to finally find the right solution to the problems that Auxerre’s 4-4-1-1 caused them. Unfortunately it was too little too late for Ajax, as Auxerre managed to win through a deflected shot and a debatable offside situation in a quickly taken free-kick.” (11 tegen 11)

We Don’t Fight, We Paint Flags Instead…

“Ultras, a word in football that immediately brings to mind certain negative images. However, a new movement of ‘Ultra’ fan groups are organizing themselves in a different way, intimidating through artistic displays of support for their team. Martyn Fisher reports.” (In Bed With Maradona)

“Much like Rafael Benitez’s time as Liverpool manager the arrival of Damien Comolli at Anfield as the club’s director of football strategy is likely to divide opinion both with fans and pundits – good or bad, genius or idiot?” (BBC)