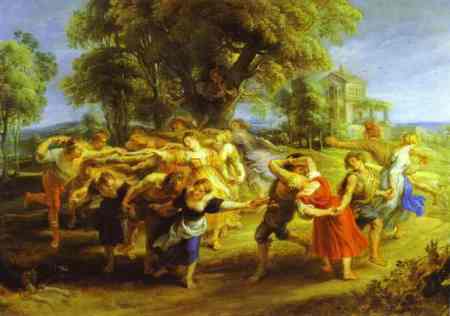 Peter Paul Rubens. A Peasant Dance
“Two goals from captain Steven Gerrard, a first Liverpool strike for Maxi Rodriguez and a late effort from Ryan Babel relegated Burnley from the Premier League and kept alive the Merseysiders’ distant hopes of finishing fourth. With two matches to play the Clarets cannot now catch 17th-placed West Ham and return to the Championship after just one season in the top flight.” (ESPN)

Burnley 0-4 Liverpool – Recap and Video Highlights – EPL – Sunday, April 25, 2010
“Liverpool still had slim hopes of Champions League football for next season but needed a win at Burnley. The two teams met at the Turf Moor on Sunday, April 25, 2010. Burnley have all but been relegated while Liverpool is in one of the Europa League spots before the match. A win for Liverpool would move them within two points of 4th place.” (The 90th Minute)

This entry was posted on Sunday, April 25th, 2010 at 6:54 pm and is filed under FC Liverpool. You can follow any responses to this entry through the RSS 2.0 feed. You can leave a response, or trackback from your own site.