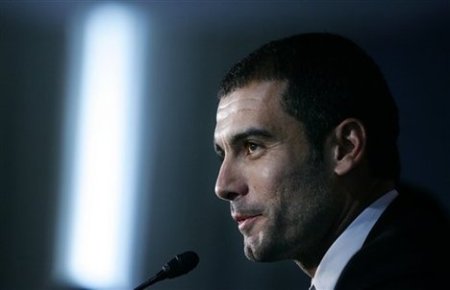 “The most eagerly-anticipated league match of the 2009/10 season, and a deserved win for Barcelona, who will now surely go on to win the title. Pep Guardiola sprung a surprise with his initial line-up, deploying Dani Alves as a right winger, with Carles Puyol at right-back, and Gabriel Milito coming into the centre of defence. Messi played centrally but drifted around, Pedro played from the left, and Keita was used more centrally than in previous matches.” (Zonal Marking)

Barcelona Win Deals Blow to Madrid
“Spain’s biggest selling daily – the sports newspaper Marca – billed it as the ‘Game of the Millenium.’ Most other media were somewhat more restrained, simply calling it the ‘final’ of La Liga. And while that may have been a bit premature – there are, after all, 7 games left in the Spanish league – there is little question that Barcelona’s 2-0 win at Real Madrid’s Bernabeu stadium dealt a body blow to the ‘Galacticos, v. 2.0’ as some have called Real’s expensively assembled squad.” (WSJ)

El Clasico
“I spent twelve hours sorting through the clichés and evasions trying to get to the truth, only to realize that the truth was in the cliché. Early in the first half, maybe even before the game started, Phil Schoen said Pellegrini would be fired if Madrid lost, because ‘right or wrong, that’s just how Madrid do business’.” (Run of Play)

Strikers’ Goal: Get Paid on Time
“Another goal from Lionel Messi and another inspired display by Barcelona decided Saturday night’s El Clásico derby against Real Madrid. Football fans are advised to savor the performance: It will be the last we see of La Liga for some time. There will be no football matches in Spain next weekend after the Spanish players union, the AFE, called a strike Friday over unpaid wages, which will halt games in the country’s top four leagues between April 16-19.” (WSJ)

Barcelona Makes Real Look Second Best
“The hour is midnight, but Madrid is not about to sleep anytime soon. Its team, Real, has just been outplayed and outclassed by Barcelona in Madrid’s own cathedral to sport, the Bernabéu. The 2-0 score line does not settle the Spanish league title, because each team has seven games yet to play. But, with goals from Lionel Messi and Pedro Rodríguez on Saturday, each of them created by the master passer, Xavi Hernández, this was indeed a defining night, another one in Barcelona’s omnipotent season.” (NYT)

The best player in the world plays in Spain
“English football has always had an uneasy relationship with all things continental. The absence of any teams from ‘The Best League In The World’ in the semi-finals of the Champions League this season has been greeted as a national disaster but this would not have always been the case. When the tournament was first created in 1955, Chelsea were forbidden from entering it by the Football League chairman, Alan Hardaker, and even the England team did not play in a World Cup until 1950.” (WSC)

Fiorentina 2-2 Inter: The same goal three times, and a good result for neither

“An exciting game that finished with a deserved point for either side, but it is a result that isn’t of much help to either at the moment – Fiorentina’s vague Champions League hopes are almost dead, whilst Inter are off the top of the table for the first time in months.” (Zonal Marking)

The A-Z of football commentary

“A. A good time to score – Surprisingly, not at any time during the game. Usually just before half-time or just after half-time. Sometimes scoring a goal can be a bad thing most notably when a team scores too early – like the Dutch in the 1974 World Cup Final.” (Left Back In the Changing Room) 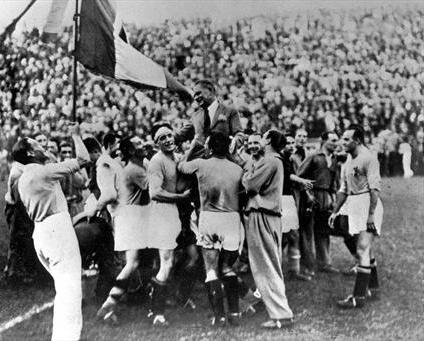 Italy
“A century ago when the Velez Sarsfield club was founded in Argentina their shirts were plain white – the cheapest they could find. Then they went with stripes of red, green and white – a tribute to the Italian origins of the club’s founders. Finally they settled on the current strip – which, with a blue V on a white background looks like something out of rugby league. This is no coincidence. The story goes that they were offered a good deal on the shirts, which a rugby club had ordered and not bothered to collect.” (BBC – Tim Vickery)

“British intelligence officials have been alerted after the North African group, al-Qaeda in the Islamic Maghreb, issued a statement warning that suicide bombers using ‘undetectable’ explosives would target the England versus United States match in Rustenburg in June. The group have been behind a string of kidnaps of Westerners, and last year were condemned for the ‘barbaric’ execution of a British hostage.” (Telegraph)

“Let’s start out with the goods news first – we (1) closed on our lease for an office for our Worthwhile Inspection Tribunal-Court Hearing and (2) had our first such hearing. The bad news? Well, Pusky has not responded to our death threat and I’m starting to feel that people don’t take this project seriously.” (futfanatico)