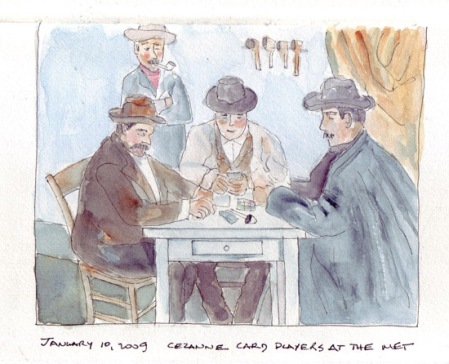 “Tell me the name of any player of note and I’ll have an image of them in my mind which I associate with an era in which they played. Perhaps I associate that image to when the player hit his peak form and was perhaps sporting a horror haircut at the time or perhaps due to my age I only recognise them as an old codger shouting from the sidelines. So when that image of the player in your mind is not what greets you on screen, it can be a right stumper. Give this a go and see if you can spot the player buried beneath the mullet/perm/pineapple.” (Three Match Ban)

“It is anyone’s guess how the 32 teams in the 2010 World Cup will be grouped by the draw Friday in South Africa, but one thing is for sure: the event will elicit sightings of things as far-fetched as U.F.O.’s and the Virgin Mary’s image on a potato chip. Soccer luminaries, with the help of the honorary hostess Charlize Theron, will pull plastic balls out of pots to determine the eight first-round groupings of four teams each. Someone will inevitably claim that the draw was rigged. No proof? No problem. Not since ‘Forrest Gump’ have table tennis balls supposedly been so vulnerable to manipulation and sleight of hand.” (NYT)

“All the fixtures in all the groups, with profiles of every team and host city…” (Guardian)

South Africans insist they will be ready 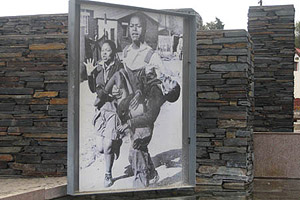 “This photograph of Hector Peterson, who was killed in the Soweto uprising in 1976, was taken by Sam Nzima, a photographer at the time for a newspaper in Johannesburg. It is on display as part of the Hector Peterson Memorial in Soweto, South Africa”
“The girl, just several steps off the tour bus full of English rugby fans, can’t be older than 15 or 16. She still is cradling her catered lunch in her hands when she is startled by the image. ‘Oh, my God,’ she says. Here, at the Hector Peterson Memorial in Soweto, is a larger-than-life-size replica of the photograph that galvanized public opinion around the world. This memorial is sacred ground to black South Africans, commemorating the 13-year-old Peterson — just one of many youths to die in Soweto in June 1976. Many of them were wearing school uniforms, defending themselves with trash can covers against police bullets. Tens of thousands of youngsters, many without informing their parents, had massed to march and protest the apartheid government’s edict that they be instructed in Afrikaans, the language associated with the oppressive government at that time.” (ESPN)

“Adidas has turned up the dial to 11 with its new match ball for the 2010 World Cup — the Jabulani, which means to celebrate in the Bantu language isiZulu. The newly designed orb, with some new technology, was unveiled Friday before the tournament’s draw in Cape Town, South Africa.” (NYT)

“If there’s one nice thing about following a team that plays in the Championship, it is that the usual mill of stories and talking points hovering around the top flight appear to be at a safe distance. Take today’s main bit of gossip, that Arsene Wenger refused to shake hands with Mark Hughes after City beat his team 3-0 last night. Quite honestly, I don’t care. The constant attention on Rafael Benitez’s chances of keeping his job at Liverpool doesn’t interest me. I’ve heard all about Sir Alex Ferguson’s run-ins with referees many times, so this season’s round of official-baiting bollocks raises a ‘meh’ from this corner of the web. Stewart Downing’s excellent performance in his first full match at Aston Villa forced a smile, but in fairness he’s yesterday’s news as far as I’m concerned. Sorry. I’m just not bothered. And the worst part is that when/if (delete as applicable) we do go back up, the essence of this reportage won’t have changed a bit.” (Smog Blog)

“There was always an air of unreality surrounding Coventry City’s three decade stint in the top flight. The Sky Blues rarely troubled the top half of the table and indeed, appeared to be attending multiple auditions for a remake of the film Flatliners. Their most dramatic escape of all came with a 4-1 victory over already crowned Champions Everton in 1985, long after other fixtures had been played and a situation that would never be allowed to occur nowadays. Only with FA Cup glory and John Sillett’s dancing in 1987 did the Midlands club rise above the humdrum, although they did brighten the mood with some ludicrous kits.” (thetwounfortunates)