“After a day of throwing brick-bats at each other, both Barca and Chelsea fans have slowly settled with the reality of the situation at Ground zero. Even the Spanish and English media are in the same mood – the article by Kevin McCarra in the Guardian is a prime example of that. Chelsea fans after a night of Euphoria has slowly understood the dangers held in the second leg.” (All About FC Barcelona)

Steven Gerrard: Chelsea turned my head because I was frustrated at Liverpool 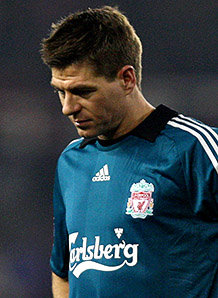 “Steven Gerrard thinks back to the time he came incredibly close to leaving Liverpool, when Chelsea’s persuasive overtures so nearly resulted in a British record transfer deal.” (Telegraph)

Liverpool v Newcastle (BBC)
“Liverpool midfielder Steven Gerrard is set to return to the first XI for Sunday’s match having missed the last four games with a groin injury.”

Match Preview: Newcastle (h) – Gerrard returns (The Is Anfield)
“Liverpool entertain relegation threatened Newcastle United at Anfield on Sunday lunchtime, hoping that Middlesbrough can have done them a favour 24 hours earlier when they host Man United.”

Rafael Benitez: Liverpool will keep Javier Mascherano and Xabi Alonso (Telegraph)
“Comments attributed to Mascherano suggested he would consider his position at the club over the summer, while Benitez remains coy over whether Alonso, arguably the club’s best player this season, will be sacrificed as he seeks to strengthen his squad.”

Rafa: I’ll keep Masch and Xabi (Sun)
“RAFA BENITEZ insists midfielders Xabi Alonso and Javier Mascherano will be at Liverpool next season.
Both players have been linked with moves away from Anfield, with Argentine Mascherano claiming his future is uncertain at the club.”

Defender Agger close to agreeing new Reds deal (ESPN)
“Liverpool defender Daniel Agger is believed to be close to signing a new long-term contract with the club after speculation that he was waiting to buy himself out of the final year of his contract.”