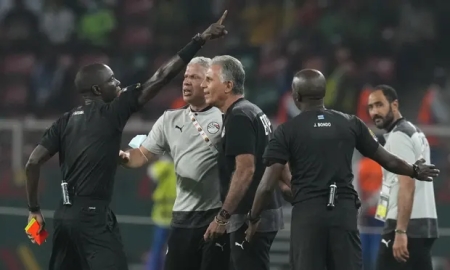 “Mohamed Salah against Sadio Mané, two great Liverpool forwards going head-to-head in Sunday’s Africa Cup of Nationsfinal. It’s the headline clash of Egypt against Senegal, the meeting of the most successful side in African history and a team that has never lifted the trophy. But to focus on them would be misleading: although both have had an influence late in games, neither Senegal nor Egypt could be said to be teams based around their attacking talent. There is an unavoidable sense that even to focus on the football is itself uncomfortable, given the tragic events of a fortnight ago when eight fans were trampled to death outside Stade Olembé, where the final will be staged. The quarter-final at the venue was moved, but after a review it was decided Thursday’s semi-final should be played there. …”
Guardian – Jonathan Wilson
Guardian – Lions, Panthers and Pharaohs: the best photos from the Africa Cup of Nations
BBC – Senegal 0 Egypt 0, Senegal win 4-2 on penalties
The Athletic – Vote Salah: Why does Liverpool’s superstar struggle for global acclaim?

This entry was posted on Monday, February 7th, 2022 at 12:48 am and is filed under African Nations Cup, Egypt, FC Liverpool. You can follow any responses to this entry through the RSS 2.0 feed. You can leave a response, or trackback from your own site.