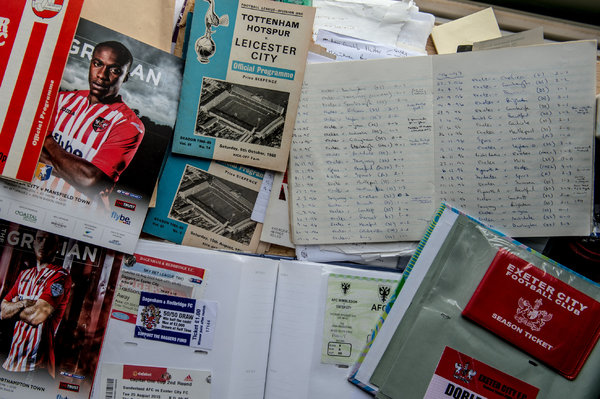 “The list includes ramshackle old stadiums, scented and scarred with century-old reminders of English soccer’s storied past, but also the gleaming cathedrals that testify to the Premier League’s rich new present. The City Ground (Nottingham Forest) and the County Ground (Swindon Town). Elland Road and White Hart Lane, but also Villa Park and Craven Cottage. Turf Moor and Deepdale and Ashton Gate. And when the final whistle blows at Saturday’s match between Manchester City and Stoke City, Martin Weiler, a 61-year-old soccer fan with no affiliation to either team, will leave the Etihad Stadium having seen a match in every one of them. In doing so, he also will become eligible for membership in one of soccer’s most distinctive supporters groups: the 92 Club, a small and exclusive fellowship made up of individuals who have watched a competitive league or cup match at the stadium of each of the 92 clubs in England’s top four divisions, which includes some teams from Wales.” NY Times

“Every once in a while an individual emerges from relative obscurity. A rags to riches tale. And there’s no better contemporary example than Vincent Janssen, a relentless forward with boundless potential, his debut season in a top-flight league has been nothing short of extraordinary. No doubt when signing for AZ last summer from second tier club Almere City – where he managed 32 goals in 74 games – he was assured of his own abilities but even Janssen couldn’t have envisaged what has since transpired.” Who Scored?

“While there has been clear progress made under Jürgen Klopp, the recent ride has not been without its moments of worry – and that’s before the issue of centre-backs and their ‘slimming’ pills. I think we can all agree that the squad he inherited now looks a lot better than any of us thought back in October; almost every player has improved, or flourished, under him (some of it will be him improving them, and some of it them finding form), and the Reds are just two games away from a second final of the season. So this bodes well. My optimism remains undimmed, when a few games into this season it was very dim indeed.” Tomkins Times

“A thought experiment. Let’s imagine the rumblings from the elite clubs reach their most extreme conclusion. Let’s assume there comes a super league of quasi-franchises playing each other over and over again. There would be some sort of trophy at the end of it, to provide at least a veneer of competition, but really it would be about revenue generation. The sporting aspect would take second place to entertainment. With no relegation, there would be a lack of fear and the game would become increasingly about attack. Goals would bring eyeballs and that, whatever lip service was paid to the charms of silverware, would be the real battle.” Guardian – Jonathan Wilson

“Alexander Hleb won the treble in his first season at Barcelona, but his move away from Arsenal wasn’t the platform he had hoped for. In the ensuing years, the Belarussian has spoken out about his regret of leaving North London. Still only 26 at the time Hleb was a central figure in manager Arsène Wenger’s team and alongside Samir Nasri and Cesc Fàbregas were forming a dynamic attacking trio.” Futbolgrad

“If you have never heard of SV Sandhausen, don’t worry you are not alone. The club from the South-West of Germany might be the most boring and forgettable one in the whole country. Nobody outside of that region knows where this small town of 15.000 even is. However the SVS is currently the 30th best football club in Germany. Which is a pretty great position for a club as bland as Sandhausen. MS Word 98, anyone? Please look at that logo!” Bundesliga Fanatic