The Current State of the Crimean Premier League 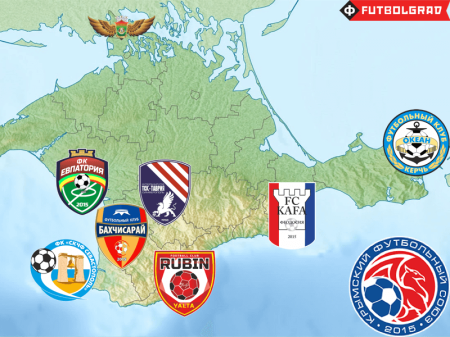 “Last week marked the two-year anniversary of Russia’s annexation of the Crimean Peninsula. Football clubs and its fans were also deeply impacted by this event, and within one year all three major clubs Tavriya Simferopol, FK Sevastopol, and the lesser-known Zhemchuzhina Yalta had to declare bankruptcy, and were dissolved, later to re-emerge as new clubs that could participate in the Russia football pyramid. These new clubs TSK (Tavriya Simferopol Crimea) Simferopol, SK Chernomorskogo Flota (SKChF) Sevastopol, and Zhemchuzhina Yalta played a handful of games in the third-tier Russian Professional Football League. On August 22, 2014 the UEFA Emergency Panel stated “that any football matches played by Crimean clubs organised under the auspices of the Russian Football Union (RFU) will not be recognised by UEFA until further notice.” The clubs were then disbanded.” Futbolgrad

This entry was posted on Wednesday, March 23rd, 2016 at 10:22 pm and is filed under Europe. You can follow any responses to this entry through the RSS 2.0 feed. You can leave a response, or trackback from your own site.