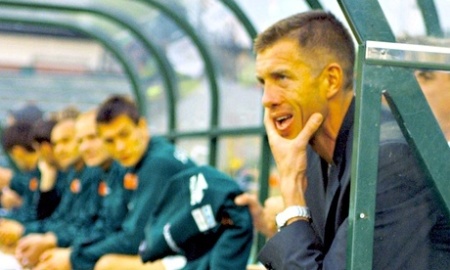 “Gwangju, 2 June 2002. Slovenia were 1-0 down to Spain in their first ever World Cup match when, after 63 minutes, Srecko Katanec took off Zlatko Zahovic for Milenko Acimovic. What followed has become Slovenian football’s equivalent of the Zapruder footage, a clip replayed endlessly on television in search of a meaning. Zahovic walked from the pitch, slapped hands with Acimovic, and then, out of focus in the background, kicked out at a bottle of water. Somewhere in those three or four seconds, the first golden age of Slovenian football came to an end.” Guardian – Jonathan Wilson

This entry was posted on Friday, November 14th, 2014 at 11:44 pm and is filed under England, Europe, Football Manager, Jonathan Wilson. You can follow any responses to this entry through the RSS 2.0 feed. You can leave a response, or trackback from your own site.