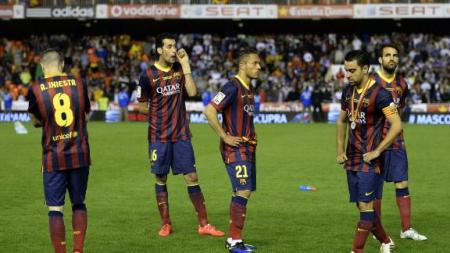 “Earlier this week, during a raid in the port city of Alicante, Spanish police confiscated a batch of hallucinogenic chocolates that had been molded into the shape of the FC Barcelona crest. The chocolates, which were allegedly laced with marijuana and mushrooms, had been disguised as soccer-themed candies by the only person arrested in the operation, a master confectioner nicknamed ‘Willy Wonka.’ The incident gave rise to a whole host of significant questions. For instance: Isn’t ‘Willy Wonka’ pretty much the only possible nickname for any master confectioner freelancing in black-market drug work? Was there even a fallback option for this guy? Is ‘master confectioner baking controlled substances into candy products’ the topic heading of basically the shallowest nickname pool known to humanity? Is the phrase ‘my candy guy, Willy Wonka’ inevitably followed by a bemused chorus of ‘which one?’ at drug-kingpin summits? How does the fraternal organization of master confectioners keep its narcotics mailers straight?” Grantland – Brian Phillips

This entry was posted on Monday, April 28th, 2014 at 6:49 pm and is filed under FC Barcelona, Run of Play. You can follow any responses to this entry through the RSS 2.0 feed. You can leave a response, or trackback from your own site.