Brazil 3-0 Spain: Spain unable to cope with Brazil’s pace and power on the break 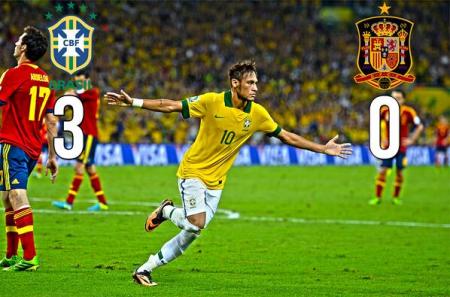 “Brazil won the Confederations Cup at the Maracana after a convincing demolition of the world champions. Luis Felipe Scolari stuck with his usual side – in five games he only deviated from this XI once, when Paulinho wasn’t 100% fit for the final group game. Vicente Del Bosque brought in Juan Mata on the left of his 4-3-3 system, but otherwise the side was unchanged. Brazil yet again started superbly – but Spain failed to mount a significant fightback.” Zonal Marking

“Brazil produced a breathtaking performance at the Maracana to overwhelm Spain and claim their third consecutive Fifa Confederations Cup. Driven on by the passion of a fiercely partisan crowd, the five-time world champions signalled their intent ahead of next summer’s World Cup by ending Spain’s 29-match competitive unbeaten record with a majestic display. Fred scored twice, but Neymar again stole the show, scoring Brazil’s second goal with a rasping left-foot shot. To compound Spain’s misery, Sergio Ramos missed a second-half penalty before Gerard Pique was sent off for bringing down Neymar as last man, with 22 minutes remaining.” BBC

Dream final a sub-plot to urban uprising (June 28)
“And so the 2013 Confederations Cup has its dream final – Brazil against Spain, the match the world has been waiting years to see. It is a clash of two philosophies. For the Brazilians, the star player (known over here as the ‘craque,’ from the English ‘crack’) tips the balance with a moment of individual inspiration. For the Spaniards the collective idea is all important – the constant passing at pace, the continuous formation of triangles, each one opening up new possibilities for a new combination, until a runner can be slipped through on goal.” The World – Tim Vickery

Brazil on the verge of greatness
“Forget history and superstition. You have to be pretty twisted to believe that because Brazil won the Confederations Cup in 1997 and 2005 and 2009 and then failed to win the big one the following year, beating Spain and lifting the trophy at the Maracana was anything but a good thing. Anyone who witnessed the performance against Spain, who felt the goose bumps from the Torcida, who saw Fred, then Neymar, then Oscar, then just about every member of the Selecao vault the pitch-side barriers and celebrate with the supporters will know just how important this was.” ESPN (Video)

This entry was posted on Monday, July 1st, 2013 at 6:48 pm and is filed under Brazil, Confederations Cup, Football Manager, Spain, Tim Vickery. You can follow any responses to this entry through the RSS 2.0 feed. You can leave a response, or trackback from your own site.