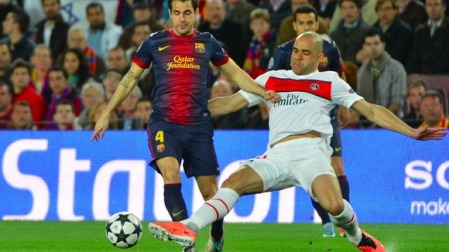 “PSG were elimintated on the away goals rule following a good counter-attacking display. Tito Vilanova named Lionel Messi on the bench, with Cesc Fabregas deployed upfront after his weekend hattrick. Adriano played alongside Gerard Pique at the back. Carlo Ancelotti was without the suspended Blaise Matudi, so used Marco Verratti alongside Thiago Motta, with David Beckham on the bench. This was similar to the first leg – both sides used broadly the same strategy, and while Barcelona dominated possession, PSG threatened on the break.” Zonal Marking

Barcelona, Bayern complete Champions League semifinals
“The two favorites may have progressed into the Champions League semifinals, but it was not easy for either team. Barcelona came from a goal down against Paris Saint-Germain to draw 1-1 to get through on away goals, while Bayern Munich needed to weather some early Juventus pressure before winning 2-0 in Italy. Here is the breakdown …” SI

“Astronauts looking down on earth in February 2011 would’ve been greeted with an unusual sight. Alongside the Great Wall of China and Felix Baumgartner on practice missions, thousands of flares lit up the night sky as the Torcida celebrated the 100th year of their beloved club Hajduk Split. Their slogan, ‘Hajduk lives forever’, appears apt.” World Soccer

Tactics for Beginners – No. 8

“Through, over or around? The more we talk the more I have become interested in what seems like a key patch of grass. It is the strip between the edge of the box and the start of the final third. In terms of lines of play it is the patch between the deep sitting back line and the midfield and will include the ‘hole’. We’ve talked about how everything that happens everywhere on the pitch has importance, but this seems to be a key place, where attacking teams seek penetration, and defending teams seek preservation. The penetration/preservation zone.” Tomkins Times

“Cristiano Ronaldo’s early strike left Galatasaray needing five – and they created enough chances to give Real a fright. Without Burak Yilmaz, Fatih Terim brought in Umut Bulut and stuck to his diamond system, rather than switching to a 4-4-1-1, as rumoured. Jose Mourinho was without Xabi Alonso and Sergio Ramos – he named the expected outfield side with Gonzalo Higuain upfront. Diego Lopez continued in goal. Real’s early goal suggested the tie was over – but Galatasaray stormed back.” Zonal Marking

Dortmund 3-2 Malaga: Pellegrini’s side defend well, but are unable to cope with late pressure

“An astonishing stoppage time turnaround means Dortmund to progress to the semi-finals. Jurgen Klopp used Jakub Blaszczykowski as his winger, rather than left-sided Kevin Grosskreutz, so Marco Reus started from the left. Sven Bender returned, but Mats Hummels was only on the bench. With a couple of suspensions to cope with, Manuel Pellegrini brought in Sergio Sanchez and Ignacio Camacho. He pushed Julio Baptista upfront, dropping Javier Saviola, with Duda coming into the side. Malaga coped well for most of the game – and two goals should have been enough to see them through.” Zonal Marking