The football professor: a profile of Dettmar Cramer 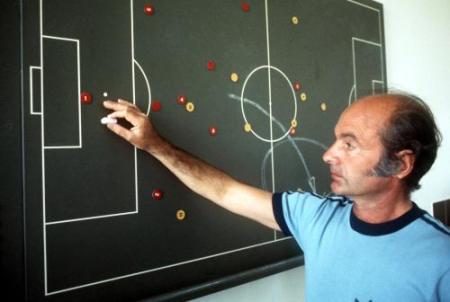 “A seldom-heralded midfielder for Germania Wiesbaden and Viktoria Dortmund, Cramer served as an officer in a parachute division during World War Two and later coached several minor club sides in his native North Rhine-Westphalia region before his appointment as a talent scout and coach for the DFB in 1948, where he worked under the tutelage of Sepp Herberger, the future architect of ‘The Miracle of Bern’.” World Soccer

Dettmar Cramer
“Dettmar Cramer (born 4 April 1925 in Dortmund) is a German former football player and coach who led Bayern Munich to the 1975 and 1976 European Cups. Cramer is commonly considered to be the father of modern football in Japan and is a member of the Order of the Sacred Treasure, 3rd Class. He also briefly coached the United States men’s national soccer team.” Wikipedia

Shakhtar and Zenit share the spoils in wide-open, high-tempo affair

“With two minutes remaining of Wednesday’s Champions League game between Shakhtar Donetsk and Zenit St Petersburg, Razvan Rat, the Shakhtar left back, sprayed a cross field ball to the right back, Dario Srna. Nothing too extraordinary about that, except that both were 20-30 yards inside the Zenit half. That’s how attacking the game was, that’s how much Shakhtar chased a late winner its performance wouldn’t have merited.” SI

Victory from the Jaws of Triumph: Ireland’s Euro 2012 So Far

“European Championship qualifying group B was a strange one: Ireland beat Armenia who beat Slovakia who beat Russia who beat Ireland (while poor fourth-seeded Macedonia looked on and whimpered). The logical progression would have been for a match to be played out between twenty-two footballs kicking a man around the pitch. That man turned out to be Richard Dunne, and the final score was Russia 0-0 Ireland, a result you could only call miraculous if you consider Dunne to be a gift from heaven. (Full disclosure: I do.) But things would have got even weirder had Slovakia beaten Russia last Friday. This wouldn’t have been odd per se: they had already beaten Russia away from home. But it would have left Ireland atop the group. That’s the weird part.” Run of Play

The Revolution Will Be Televised

Ian Ayre
“The last few days have provided a great deal of ammunition for those lamenting the state of football, specifically the seemingly inevitable march towards a game completely dominated by financial matters. The charge was led by Liverpool’s managing director, Ian Ayre, who suggested that the leading clubs should receive a larger slice of the money from overseas TV rights, as the average fan in Kuala Lumpur ‘isn’t subscribing… to watch Bolton.'” Swiss Ramble

Napoli 1-1 Bayern: all the action in the first half

“These two sides seemed to settle for a draw in the final stages – they remain in the top two positions in Group A, the toughest in the competition. Walter Mazzarri went with his first choice XI with one caveat – Juan Zuniga played instead of Andrea Doessena as the left wing-back, although he is seeing a lot of playing time this season anyway. Jupp Heynckes’ selection was also his most-used players this season with a single exception – Jerome Boateng played instead of Rafinha. This was a peculiar match – a very interesting tactical battle in the first half with the two goals both owing much to the formations and positioning of the sides, and then (in tactical terms) a completely dead battle in the second.” Zonal Marking

“There could have been plenty of talking points in Germany following the Bundesliga’s ninth round of games at the weekend. Bayern Munich’s continuing, and almost ridiculous, dominance, for instance, or the sudden insurgence of the cellar dwellers, as the bottom three teams all won away from home. Instead, almost everyone – from coaches to pundits like Franz Beckenbauer to the viewers of Werder Bremen announcer Arnd Zeigler’s cult call-in show on regional television – were debating one particular aspect of the rulebook.” ESPN