The House Where I Grew Up, Johannesburg
“A monumental thrashing for England, at the hands of a German side who had pace, movement, tactical awareness and ruthlessness in front of goal. At times they appeared to be playing football from a different world. England were simultaneously boxey and positionally woeful – quite a difficult combination to achieve. Germany, on the other hand, played superbly. This performance from a young side in a high-pressure situation demonstrated remarkable quality in both technically and mentally. The analysis of the goals will go on for days, the obituaries of English football will go on for weeks, but Germany’s performance should not be underestimated.” (Zonal Marking)

“Argentina needed a couple of breaks in its second round World Cup match. It got one from the referee and another from Mexico. Carlos Tevez scored twice — once on a disputed goal — and Gonzalo Higuain added another as the Albiceleste beat Mexico 3-1 on Sunday to move into the quarterfinals.” (ESPN)

Argentina 3-1 Mexico – Video Highlights, Recap, and Match Stats – World Cup – 27 June 2010
“Argentina faced Mexico for a second straight FIFA World Cup in the knockout stage. Mexico was hoping to avoid the same fate as the USA who were eliminated by the same side in two straight World Cups. Argentina have been one of the top if not the top side in the group stage and looking very dangerous.” (The 90th Minute)

The High Drama of Penalty Kicks

“It is accepted soccer religion that no one wants to see a game decided by penalty kicks. Yet it is also soccer law that if certain matches remain tied after 120 minutes of play, that is exactly what will happen. Beginning today with the World Cup’s round of 16, when one match determines who advances and who is knocked out, that law takes effect.” (Vanity Fair) 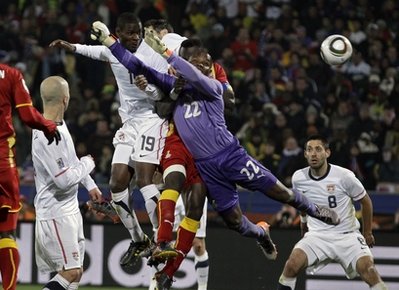 “A tremendous football match won by the side who showed just a little bit more organisation and structure throughout, and made fewer mistakes. Ghana made a change on the right of midfield, bringing in Samuel Inkoom – often deployed at right-back. The US fielded a line-up largely as expected, the one issue being the central midfield partner for Michael Bradley. Ricardo Clark got the nod, although he didn’t last long.” (Zonal Marking)

Putting Tears Aside: Celebrating Ghana’s Victory
“Over the last week, everyone from the New Republic, to Reason Magazine to the various inept corners of the right wing blabbospehere (neocons, libertarians, and wingnuts OH MY!) has taken a whack at my little blog post in the Nation After Donovan’s Goal: Joy or Jingoism? The article seemed innocent enough. I wrote about my drunken joy over seeing the miraculous US win over Algeria, but regretted the ugly openly racist jingoism I heard in the immediate aftermath on DC Sports Radio. My lament seemed innocent enough.” (The Nation)

Watching Ghana Beat the U.S.A., in Johannesburg
“Well, being on a different continent certainly changes things. After the epic flight from the U.S. to South Africa — 16 hours, including the required putzing around on the tarmac in Atlanta — I arrived just in time to catch the U.S.-Ghana game at a restaurant here in Melville, Johannesburg. I watched with Simon Kuper, who is the author of the excellent Soccernomics and reporting for the Financial Times on the World Cup, along with a few other journalists.” (Soccer Politcs)

World Cup 2010: United States 1-2 Ghana (aet)
“When Ghana becamse independent in 1957, the first of the wave of sub-Saharan countries to do so in that period, there’s a nice story about then Vice-President Richard Nixon attending their Independence Day celebrations. The US were broadly supportive of countries seeking to cast of the yoke of the old European colonial powers, and a beaming Nixon was shaking hands with anyone and everyone. “How does it feel to be free?” he asked of one black man he took for a native; ‘I wouldn’t know sir,’ the man replied, ‘I’m from Alabama’.” (twohundredpercent)

US Loses & ESPN Colossal #FAIL
“So, the US lost. I am sad, but happy we did not get played off the park and advanced out of our group. Salutations to Ghana – I do not wish you well, but you deserved to win. Daggumit! Still, despite the unprecedented attention to the World Cup in the US, unfortunately big media continues to churn out amusing errors by the boatloads. You may recall the NYTime’s error about Zizou playing for Italy. Well, ESPN did them one better. Check out this screenshot…” (futfanatico)

Gyan’s extra-time goal propels Ghana over U.S., into World Cup quarters
“The nail-biter comeback wasn’t there this time. The U.S. soccer team relied on it once too often. Life on the World Cup edge came to an exhausting and crushing end against a familiar foe Saturday night, when Ghana — led by Asamoah Gyan’s goal 3 minutes into overtime — posted a 2-1 victory that ended a thrilling yet futile tournament for the United States.” (ESPN)

United States (USA) 1-2 Ghana – Video Highlights, Recap, and Match Stats – World Cup – 26 June 2010
“The USA looked to get revenge from the 2006 World Cup as they faced Ghana who knocked them out in that tournament. Both teams have a favorable draw where they would play Uruguay in the quarterfinal round if they would advance in this match.” (The 90th Minute)

“England’s World Cup ended in a mixture of humiliation and controversy as they were thrashed by Germany in Bloemfontein. Germany’s deserved win and convincing victory margin will be overshadowed forever in the minds of Fabio Capello and his squad by a moment they believe robbed them of the hope of reaching the last eight. Matthew Upson had thrown England a lifeline just before half-time after a vastly superior Germany had taken a stranglehold on the game with goals from Miroslav Klose and Lukas Podolski.” (BBC)

World Cup 2010: Germany 4-1 England
“There have been times over the previous four or five days or so that this afternoon’s match between Germany and England has threatened to collapse under the weight of its own hubris. England, seemingly unable to wait for this afternoon to come around, has become a nation of tea leaf readers, swirling a cup which contains the history of the matches between the two nations in a desperate attempt to try and pre-determine what is going to happen. The coverage in the press has taken a turn for the weird. A Steven Gerrard press conference was the lead story for much of the press this morning, with the England captain being described in various organs as having “roared” at it, which will have come as news to anyone that has seen Gerrard being interviewed in the press before. This afternoon, however, any talk of ‘roaring’ couldn’t be any more misplaced.” (twohundredpercent)

Germany 4-1 England – Video Highlights, Recap, and Match Stats – World Cup – 27 June 2010
“One of the rivalries in international competition, England v Germany, was renewed with the teams meeting in the round of 16 of the 2010 FIFA World Cup. Germany won Group D while England was second in Group C. It was a match that was about even as far as the oddsmakers.” (The 90th Minute)

“Chile coach Marcelo Bielsa came to the World Cup with a point to prove. Eight years ago, in charge of his native Argentina, his side turned up in the Far East as favourites but crashed out in the first round and despite their impressive start in South Africa, there was a moment when it seemed that Chile, too, would not make the knockout stages. When they went two goals down to Spain and had a man sent off, hopes of a place in the last 16 appeared to be slipping away but they pulled a goal back, and with Switzerland held by Honduras, Chile were safe.” (BBC – Tim Vickery)