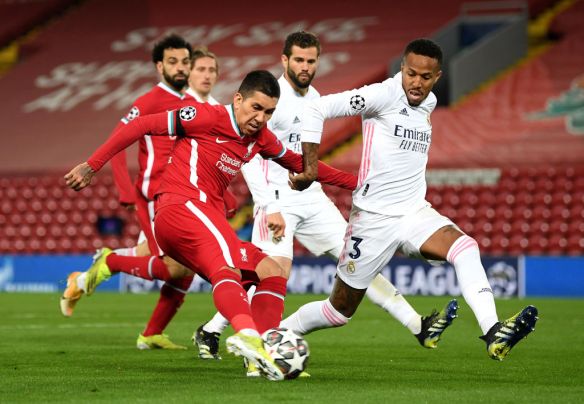 Roberto Firmino of Liverpool shoots while under pressure from Éder Militão of Real Madrid during the UEFA Champions League quarter-final second-leg match on April 14, 2021 in Liverpool, England.
“Yesterday, once again, the prospect of a breakaway European Super League (ESL) reared its head. The proposal — to carve out a continental competition in which fifteen of the game’s elite clubs could never be relegated — was met with widespread dismay by those who love the game. Despite a year that has shown just how vital fans are for the ‘spectacle’ of football, it was the match-going fans that once again were of least concern. Instead, if the plans go ahead, the future of football will be shaped by television and advertising — an entertainment industry that the top clubs estimate will deliver them £300 million per year, far outstripping their current domestic and Champions League revenues. It’s important to point out that the Super League isn’t an anomaly. …” Jacobin, European Super League explained: the contracts, plots and threats that shook football to its core, Guardian: The greed of the European Super League has been decades in the making, Guardian – ‘It’s war’: what the papers say about the European Super League, NY Times: Super League Appears to Collapse as City Walks Away